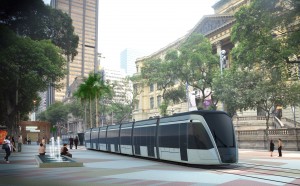 The first train of the new public transportation system connecting Rio’s Centro, Port Zone and domestic airport Santos Dumont, the VLT (Vehicle on Light Tracks) has arrived in the city from France for testing. The VLT is set to start circulating with passengers on its first line in April 2016.

The VLT is one of the latest innovations in transportation technology and Rio de Janeiro will be only the second city after Dubai to receive the tram-like vehicle that receives electricity entirely from its tracks and therefore doesn’t need any aerial power cables.

“Rio will be the second city in the world to have a VLT one hundred percent free of the overhead contact line, ie no air power cables to feed the vehicle with energy. The first was Dubai in the United Arab Emirates. The system, called APS, together with capacitors, provides electricity along the tracks, which are energized only in the exact location where the composition is passing through,” Jorge Arraes, Special Secretary for Public-Private Partnership Concessions told O Globo.

Each train with three cars will be able to transport 420 passengers and circulate with an average speed of seventeen kilometers per hour around the 32 stations. Intervals between the trains will vary between 3 and 15 minutes, depending on the distance and time of day. The ticketing system will use the Bilhete Único and voluntary validation, instead of fee collectors and turnstiles.

The first stretch that will receive a VLT by the end of the year is between the Rodoviaria Novo Rio bus station and Santos Dumont Airport going via Avenida Rodrigues Alves, Praça Mauá and Avenida Rio Branco. It will run operational tests until opening up for passengers in April 2016.

The second stretch between the Central do Brasil train station and the Praça Quinze boat terminal will open for passengers in August 2016. It will pass Avenida Marechal Floriano in one direction and Campo de Santana, Praça Tiradentes, Largo da Carioca and Rua Sete de Setembro in the other direction.

At the moment however, the main work for the VLT is still finishing to lay the tracks. So far, five of the total 27 kilometers have been laid out, amounting to eighteen percent of all tracks. The works is most complete around the Novo Rio bus station, while there is no estimated schedule yet for works to begin between the Central do Brasil train station and Avenida Rio Branco.

The train that arrived in Rio de Janeiro is fabricated by Alstom and was sent to Brazil from La Rochelle in France. Another 31 trains are expected to arrive soon, another four directly from France, while the remaining ones will be assembled in the new Alstom factory in Taubaté, São Paulo.

The factory in São Paulo was built only for the VLT in order to transfer the technological know-how of the trains to Brazil with the possibility to construct trains for other cities as well. Santos, Brasília, Cuiabá and Curitiba have already shown interest.