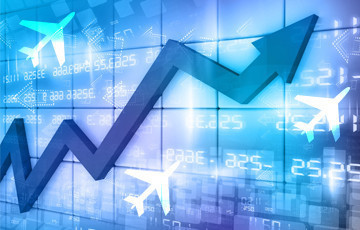 The airfreight industry ended 2014 on a “positive note” said IATA, after releasing its full-year cargo data.
The figures showed 4.5 per cent demand growth in freight tonne kilometres (FTKs) compared with 2013. “That is a significant acceleration from the 1.4 per cent recorded in 2013 over 2012,” said the global airline association.
Moreover, the market expansion gathered momentum as 2014 progressed, it continued. “The year finished on a positive note, with growth in December accelerating to 4.9 per cent, compared to December 2013.”

The vast majority of the growth in 2014, however, was in the Asia-Pacific and Middle East regions, which contributed 46 per cent and 29 per cent respectively to the total expansion in FTKs. Growth was recorded in all other regions, but was particularly weak in Latin America.
In Asia Pacific, increasing import demand and continuing manufacturing strength boosted volumes, with Japanese and Chinese markets making particularly important contributions. Load factors remain the strongest load factor of any region.

Middle Eastern carriers enjoyed the strongest growth of any region, expanding 11.3 per cent in December and 11.0 per cent for the year as a whole. Airlines have extended their networks and increased capacity by 11.1 per cent to boost the region’s status as a global hub.
In fact, Middle East carriers were responsible for over 37 per cent of the total increase in global freight capacity in 2014.
But Latin American airlines reported a 4.5 per cent fall in FTKs in December, the only region to report a decline with growth of only 0.1 per cent for 2014 as a whole.

Volumes have been affected by economic slowdown across the region, particularly in Brazil and Argentina.
Nevertheless, “after several years of stagnation, the air cargo business is growing again. This is largely being driven by the uptick in world trade over the second half of 2014.”

But while recent concerns over the global economy and a fall in business confidence have not yet impacted air cargo, “it is a downside risk that will need to be watched carefully as we move through 2015,” said IATA director general and chief executive, Tony Tyler.
Major challenges remain despite the improving growth trend, IATA concluded. Yields declined for the third straight year in 2014, with no immediate prospect of improvement. Cargo revenues remained basically unchanged at $62bn or $5bn below their 2011 peak.

But, said Tyler, “the industry is focusing on providing a stronger value proposition to meet evolving customer needs. That’s what is driving efforts such as cutting shipping times, ensuring high-quality handling of temperature-sensitive goods, or benchmarking quality to improve customer transparency. It’s all about delivering value as a supply chain with a strong vision of the future.”